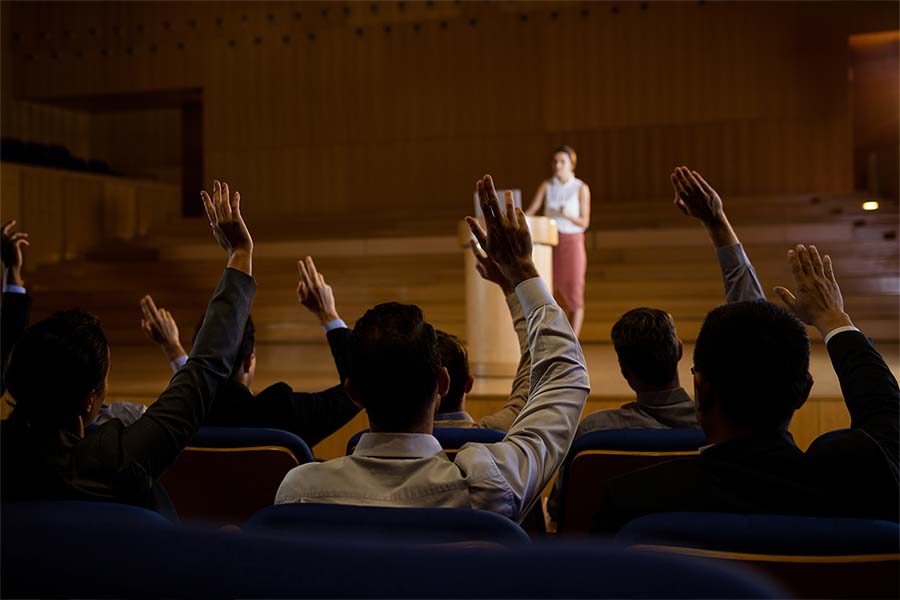 Almost 150 years ago, in 1876, US army officer Henry Martyn Robert created Robert’s Rules to help churches and organisations run their meetings fairly. The rules were inspired by the senate procedure at the time. The fundamentals of the rules were to:

Today, Robert’s Rules (which has since undergone many updates and new editions based on usage, feedback and modernisation) is the most widely used set of rules for parliamentary procedure in the US. As such, it’s also been adopted globally for school PTA meetings, board meetings and non-profit businesses alike. The latest edition is Robert’s Rules of Order Newly Revised – also known as RONR – which was published in September 2020.

One of the main elements of running meetings in this way is the use of motions – a critical part of almost any meeting. So, what are motions in Robert’s Rules of Order and how can we make sure they are presented and voted on fairly?

Table of content hide
1 What do motions mean?
2 Types of motions
2.1 Main motion
2.2 Subsidiary motions
2.2.1 Postpone indefinitely
2.2.2 Amend
2.2.3 Refer to a committee
2.2.4 Postpone
2.2.5 Limit or extend limits of debate
2.2.6 Previous question
2.2.7 Lay on the table
2.3 Privileged motions
2.4 Incidental motions
3 The steps in presenting a motion
3.1 1. A member obtains the floor and makes a motion
3.2 2. Another member seconds the motion
3.3 3. The chair states the motion
3.4 4. Members debate the motion
3.5 5. The chair puts the motion to a vote
3.6 6. The chair announces the results of the vote and what will happen with the motion
4 Tips for using RONR motions
5 FAQs
5.1 What happens if no one seconds a motion?
5.2 Does the chairperson have the authority to move a motion?
5.3 How do you write motions in meeting minutes?
6 Conclusion
7 References and further reading

What do motions mean?

A motion is a proposal by a member of the group. It’s a statement that describes an action or a decision. It’s how decisions are made among the committee.

Some of the basic rules for using motions in Robert’s Rules of Order are:

Instead of saying “I think we should do this”, which you may do in an informal meeting, motions need to be presented by saying “I move”. Negative motions aren’t allowed according to RONR, so you can’t say “I think we should NOT do this” or “I move that we don’t”, but you could say “I move that we hire an in-house marketing team”, for example, because it is a positive motion.

Once a motion is shared, it must be seconded by another member to move forward: “I second this motion”. This process ensures that all decisions in the common interest are discussed, all member feedback is heard and then the motion can be passed (or not) by a majority vote of the quorum. If no one seconds a motion, it shows that there is no one else in the organisation who wants to see the motion debated and discussed.

Let’s take a look at what types of motions there are and how to present each of them.

The most important form of motion is the main motion. According to RONR, the main motion, or a principal motion, is “a motion made to bring before the assembly, for its consideration, on any particular subject…It takes precedence of nothing…and it yields to all privileged, incidental, and subsidiary motions”. At their core, main motions are the bigger questions that need to be updated. But, despite their name, they’re not untouchable – they can be altered by other forms of motions, such as subsidiary motions.

To “kill” a motion. This allows you to stop any conversation around the main motion and to stop the vote on it. Technically, it’s not postponed; the consideration of it is cancelled altogether.

To change or alter the main motion before voting on it.

Refer to a committee

To send the main motion and any pending subsidiary motions to a committee for consideration.

Including postponing definitely, or postponing to a different time, to delay the consideration of the main motion and any pending subsidiary motions.

Limit or extend limits of debate

To alter the limitations on the number or length of speeches, after rules have previously been adopted. Generally speaking, this is two minutes for each person to discuss their perspective on the debate.

To stop the debate and vote now.

Lay on the table

To end consideration of the main motion and any pending subsidiary motions, allowing for urgent business to be considered.

A privileged motion is often something with great importance or urgency. These motions aren’t debatable. Let’s look at the types of privileged motion and how to ask for them under RONR. Some of these are also known as “stating a point” and don’t need to be seconded.

Incidental motions are used as “housekeeping”. They take precedence over main motions, subsidiary motions and any pending question. The Newly Revised Robert’s Rules mention the following permissible incidental motions – these are undebatable motions.

The steps in presenting a motion

Now we know the motions available and how to present them, let’s review the steps needed under Robert’s Rules.

1. A member obtains the floor and makes a motion

Once the member has risen, addressed the chair and been recognised by the chair, they take the floor: “I move that we hire an in-house marketing team”.

2. Another member seconds the motion

Next, another member seconds the motion, as it’s a main motion. They don’t need to be recognised by the chair or take the floor for this: “I second the motion”.

3. The chair states the motion

The chair says: “It is moved and seconded that the organisation will hire an in-house marketing team. Is there any further debate?”. This step is important, as unanimous consent can be taken at this point if it’s something the majority of the assembly already agrees on.

The chair then recognises those who want to debate and express their opinions. As covered by Robert’s Rules, all members of the assembly have an equal right to be heard, although they don’t have to speak if they don't want to. Generally, there is a time limit of about two minutes for each member to speak when debating or discussing. The chair will preside over this and implement any rules as needed throughout.

5. The chair puts the motion to a vote

Once everyone who wants to has spoken, the chair asks: “Are you ready for the question?”.

The chair restates the motion: “The question is on the motion to hire an in-house marketing team. Those in favour of the motion say ‘aye’, those opposed say ‘no’”.

6. The chair announces the results of the vote and what will happen with the motion

The following summary will help you determine when to use the actions described in Robert's Rules and how to do so.

What happens if no one seconds a motion?

If no one seconds a motion, it can be reintroduced another time. If a motion requires a second but didn’t receive one and was still discussed or voted on, it’s too late to object or rescind the vote based on that.

Does the chairperson have the authority to move a motion?

How do you write motions in meeting minutes?

Meeting minutes shouldn’t include detailed notes on who said what in each of the debates. Instead, include the top-line details:

While Robert’s Rules of Order motions can seem like a minefield to navigate, we hope this guide with examples can help your meetings run more smoothly. Remember that one of the fundamentals of Robert’s Rules is to give everyone the opportunity to be heard equally, so don’t be afraid to speak up as needed.

Still not sure where to start? iBabs can help. Board meeting management software can make minute taking, document sharing and notes easier to collaborate on and manage within your organisation. Get started with a free product demo today to see how you can save time using iBabs’ board portal.